Richard Branson, the founder and chairman of the Virgin Group of Companies. His first biography which was published in 1998 is Losing my Virginity. After 20 years, he published Finding my Virginity, his second autobiography about what happened after the first book. 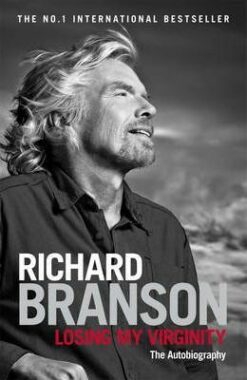 Praise for Losing my Virginity

“Richard is good-looking and very smart, which is sexy to start with. He also makes a billion dollars before breakfast—and still knows how to have fun.”
— Ivana Trump
“Few people in contemporary business are as colorful, shrewd, and irreverent, and probably no one’s nearly as much fun to be around. . . . Branson embodies America’s cherished mythology of the iconoclastic, swashbuckling entrepreneur.”
— GQ
“Branson wears his fame and money exceedingly well: no necktie, no chauffeur, no snooty clubs. . . . What continues to set Branson apart is the unique — and, to some, baffling — nature of his ambition. . . . He isn’t interested in power in the usual sense of influencing other people. . . . Boiled down to its singular essence, Richard Branson just wants to have fun.”
— Newsweek
“Branson, a self-described ‘adventure capitalist,’ is a business-creation engine who was clearly born in the wrong place. . . . Those business instincts are matched by an ability to motivate people who work for him. And who wouldn’t want to — Branson seems hell-bent on making sure that everybody, but everybody, is having as much fun as he is.”
— Time
“Richard Branson . . . is dressed to the nines: in a $10,000 white silk bridal gown with a traditional veil and train and acres of lace. . . . Branson is expected to do the unexpected, even the bizarre — anything to publicize his latest venture. . . . The fact is, Branson’s widely reported stunts seem almost staid compared to the unconventional way he manages his burgeoning empire.”
— Forbes ASAP

Praise for Finding my Virginity

After creating 12 different billion-dollar businesses and breaking dozens of world records, wouldn’t you think you’d done it all?

Not Sir Richard Branson. Having brought the Virgin brand to all corners of the globe, he’s now reaching out to the stars as he prepares to launch commercial space travel with Virgin Galactic.

In this non-stop memoir, Richard takes you inside his whirlwind life: from reinventing his companies in the midst of the financial crisis and devastating personal losses, to tackling the planet’s biggest challenges, to the joys of becoming a ‘grand-dude’ at 64.Discover the irrepressible spirit, ingenious vision and relentless drive that has made Richard the ultimate entrepreneur.

The iconoclastic Virgin founder is still changing the world. Next comes outer space.